SINGAPORE, Dec. 14, 2021 /PRNewswire/ -- Over two days on 30 November and 7 December, Johnson & Johnson, together with the National Tuberculosis Programs of Indonesia, the Philippines, Thailand, and Vietnam, hosted the Asia-Pacific Tuberculosis Forum 2021. The forum was convened with the goal of advancing regional progress toward ending tuberculosis (TB) – which, despite being preventable and treatable, remains one of the leading causes of death from an infectious disease in Asia-Pacific.

With the theme 'United Against TB', the two-day virtual forum was attended by almost 500 participants, including leaders, policymakers, NGOs, and clinicians from across Asia-Pacific. Speakers from Indonesia, the Philippines, Thailand, and Vietnam shared local best practices, learnings, challenges, and recommendations, with the mutual aim of achieving the United Nations (UN) Sustainable Development Goal of ending TB by 2030.

A key discussion area was on improving case detection, which remains one of the most significant barriers in the fight against TB. In Asia Pacific, TB incidence was estimated at 6.1 million in 2020, but only 3.9 million cases were notified[1]. Notably, the WHO Southeast Asia region carries the highest burden for TB globally, reporting the largest number of new cases (43%) in 2020[2]. 4 in 10 people with TB in the region go undiagnosed and untreated[3], a situation exacerbated by health disruptions caused by COVID-19. This in turn has led to the number of people diagnosed and treated in worst-affected countries fall to 2008 levels, threatening progress toward ending TB[4].

Reflecting on the forum, Ana-Maria Ionescu, Global TB Franchise Lead, Johnson & Johnson Global Public Health, said, "The forum demonstrated the determination, focus, and innovation of the TB community and national TB programs in Asia-Pacific, which have been critical in maintaining lifesaving, continuity of essential TB services for so many people living with TB, and mitigating some of the worst impacts of COVID-19. Johnson & Johnson is deeply committed to unlock innovation at local, regional and global levels to find the millions of missing, undiagnosed people that are living with tuberculosis - and in this way contribute towards the goal that all of us share – making TB a disease of the past.

The forum also stressed the importance of mobilising youth to end TB. Young people between the ages of 15-34 are disproportionately affected by TB, carrying the heaviest burdens of the disease[5]. Johnson & Johnson recognises that a key first step is in enabling their meaningful participation in national TB efforts and will be exploring initiatives aimed at activating youths as agents of change in the region.

Jacki Hatfield, Global Strategic Partnership Lead TB, Johnson & Johnson said, "To ensure that no young person is left behind, we need to recognise youths as agents of change capable of addressing pertinent issues in tackling tuberculosis, such as gaps in awareness and access, as well as confronting stigma and discrimination. Through our ongoing work, we look forward to advancing engagement with youths and amplifying their voices to end TB." 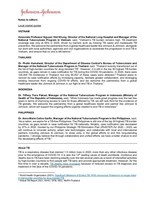 About Biotechgate
The Brazilian Life Sciences Database is a product of Venture Valuation and part of the global Life Sciences lead generation and intelligence platform Biotechgate. Our mission is to provide up-to-date company and business information of the Biotech, Pharma and Medtech sectors to professionals everywhere, in order to support them in identifying the most appropriate business partners, customers and suppliers.